Your browser is not supported. Please update it.
Telephone 01859 550226
Website by GolfWorking

On 24th November 2021, by Club Administrator 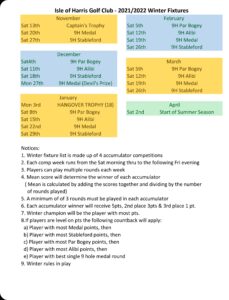 On 8th November 2021, by Club Administrator

Here is a link to the BBC iPlayer page where first five episodes are available to view:  https://www.bbc.co.uk/programmes/m0010b5q

On 5th October 2021, by Club Administrator

Entry for next year’s open are now available to book through masterscoreboard, for members with login details book through normal procedure for those without logins you can book as a visitor.

Please note both life members tournament & texas scramble are exclusively for life members anyone entering either who isn’t in that category will be removed.

On 5th September 2021, by Club Administrator

END_OF_DOCUMENT_TOKEN_TO_BE_REPLACED

It was with great sadness that our local member Colin Troy passed away on the course during the Friday session of our Open Tournament. A true gentleman who quietly went about his golf down at Scarista.

Colin was a newish member of the Golf Club having joined during the last 18 months, this was Colin returning to golf after a number of years away from the game but his games with good friend and playing partner Peter Prince reignited his enthusiasm for the game and It is doubtful if there were many members who played as often as Colin and Peter over the last year.

Both Colin and Peter looked at the game as something not to be rushed and would make the most of the opportunity to play our wee links at Scarista, taking their time to enjoy the the craic with each other but always aware of the fact that others were in more of a rush and they would without question stand aside to let other groups through leaving them to go at the pace they enjoyed. Just as with many of us the golf was a game of light hearted banter and nobody at the club will feel the passing more that Peter. The condolences of the club go to Janet, Colin’s children and the wider family and friends.

The Open was stopped following Colin’s passing and while it is not possible to hold the full event this year we will be holding a one day Open in memory of Colin with all proceeds going to his family. This one day Open will take place this Saturday (21st) with a shotgun start at 10am and will be followed by the prizegiving where we will raise a toast to Colin. This is an Open competition so visitors and members from other clubs are welcome to play.

On 5th August 2021, by Club Administrator

On 3rd August 2021, by Club Administrator